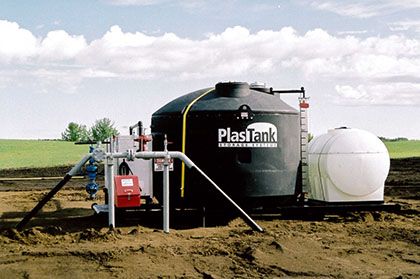 Storage tanks and process tanks are industrial containers used for a variety of purposes. They can have several configurations depending upon factors such as dimensions, arrangement, orientation, and wall configuration.

Process tanks and similar equipment have many applications in several industries such as chemical processing, petroleum production, food and beverages, oil and fuel processing, power generation, water applications, and more.

A double-walled tank is designed to provide secondary containment by enhancing the protection against tank failure. It can be customized by adding ultrasonic level indicators, leak detectors, and tank ladder assemblies to identify and monitor in case of any leakage.

Primarily, there are eight types of tanks used to store liquids:

At Aspire Energy Resources Inc., we provide design and fabrication services to a variety of clients from the energy industry. We have several types of tanks such as above ground water storage tanks by PlasTank, double-walled tanks, and more. Our team of experienced and knowledgeable technicians will help you find the right type of storage and process tanks suitable for your business.

For more information about our services and products or to discuss your project, you can reach out to our specialists by calling 403-314-5422 or 1-800-993-9958.  You could also fill out our online form for a project quote.